Tamanu oil has been thoroughly researched, and the conclusive evidence on its ability to heal damaged skin is overwhelming. Its benefits are notable for the treatment for scarring, stretch marks, minor cuts and abrasions, rashes, sores and much more.
Can be used directly on the skin or mixed within formulations.

THE HISTORY OF TAMANU OIL

Tamanu oil originates from a nut grown from the Ati tree in the South Pacific called the tamanu nut. It has been used for hundreds of years to clear up essentially any skin condition. It is a secret that’s been forgotten, but the benefits of tamanu oil are slowly being realized again and are trending worldwide.

In the early 1900’s, the Western world was introduced to this unique oil. News had spread from France that it was beneficial in the treatment of leprosy and of pain. In 1918, French scientists discovered its wonderful topical uses, such as its healing effects and skin regeneration properties.

The Tamanu tree is indigenous to tropical Southeast Asia; it is found in Thailand, Vietnam, Myanmar, Malaysia, South India, Sri Lanka, and the Melanesian and Polynesian islands. It is grows up to three meters tall, sporting cracked, black bark and elliptical, shiny leaves. The Tamanu tree blooms twice annually with fragrant, white flowers, which later yield clusters of yellow-skinned spherical fruit. The fruit’s pulp tastes similar to an apple, within which a large nut is embedded. The nut contains an odorless pale kernel, called punnai in some Pacific areas. This kernel is dried in the sun for two months until it becomes sticky with a dark, thick, rich oil; it must be protected from humidity and rain during drying. This sticky oil is cold-pressed to make a greenish yellow oil similar to olive oil.  To put this spectacular oil into perspective, and to further justify its relatively high cost, It takes 100 kilograms of Tamanu fruit, the amount that one tree produces annually, to yield just 5 kilograms of cold pressed oil!  Natives believed the Tamanu tree was a sacred gift of nature and that gods hid in its branches.  It was their answer to skin protection from hot sun, high humidity and ocean wind.

In the past, it is understandable why tamanu oil didn’t become popular in the Western world. The difficulty and expense of transporting the product to other regions outside of the South Pacific were just too much. However, those hurdles are not at all significant today as they were in the past which is allowing the oil to be rediscovered again here in America.

THE HEALING POWERS OF TAMANU OIL

Take a look at this list of healing properties: 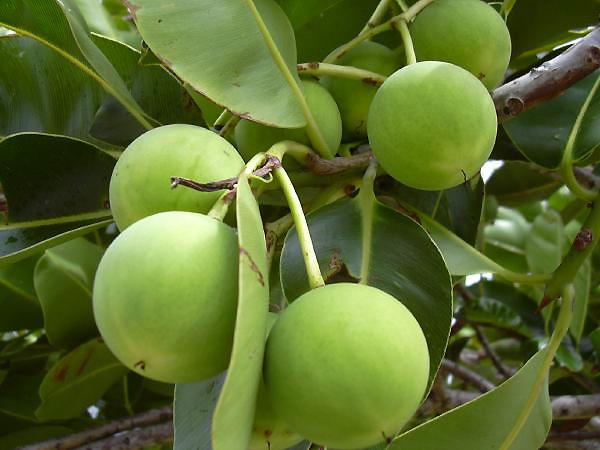 HOW TO USE TAMANU OIL

Tamanu oil is highly absorbable by your skin and has a light and pleasant aroma. It is suitable for all skin types and is mild enough to use several times a day. *However, as with any essential oil or carrier oil, be sure to perform a skin patch test before use, just to be sure you will not have an adverse reaction to it.

Furthermore, when purchasing tamanu oil, be sure that it is 100% pure and cold-pressed from the nut of the tree ─ and from an organic source.

Current and traditional use across the globe

Indonesians soak the leaf in water; the resulting blue solution is applied to inflamed eyes or taken internally for heatstroke.  It is used as an astringent for hemorrhoids in Philippines. The Manus of Papua New Guinea heat leaves over a fire until they soften, then apply them to skin ulcers, boils, cuts, sores and pimples. On Dobu Island, leaves are boiled, and the resulting solution is used to wash skin rashes.
In the Philippines, the sap is mixed with sulfur to create an ointment for boils, open sores and wounds.  In the 18th century, native Jamaicans used a similar species for wounds and sores.
Fiji natives use Tamanu oil for joint pains, arthritis, bruises, oozing wounds, chapped lips and preventing diaper rash.  In most south sea islands it is utilized as an analgesic for sciatica, rheumatism and ulcers.
Pacific islanders apply Tamanu oil to scrapes, cuts, burns, insect bites and stings, acne and acne scars, psoriasis, diabetic sores, anal fissures, sunburn, dry or scaly skin, blisters, eczema, diaper rash and herpes sores–and even to reduce foot and body odor!
In Europe, sometimes called Domba oil, it has a 70 to 75 percent success rate in alleviating rheumatism and scabies.  It’s also effective on gout and ringworm. It can be applied to mucous membrane lesions.  It heals chapped skin, post-surgical wounds, skin allergies, cracked skin, bed sores, wounds, rashes, abrasions, athlete’s foot, boils, and infected nails.
Tamanu oil has even healed severe burns caused by boiling water, chemicals and X-rays.  Its anti-inflammatory properties reduce rashes, sores, swelling and abrasions.  Tamanu oil promotes new tissue formation, accelerating healing and healthy skin growth.
Tamanu oil reputedly relieves a sore throat when it is applied to the neck. It’s pain-relieving properties have also been used traditionally to relieve neuralgia, shingles and believe it or not, leprous neuritis!  In the 1920s, Sister Marie-Suzanne, a nun stationed in Fiji, topically applied Tamanu oil to leprosy victims with positive results.

More Powerful than an Antibiotic

Tamanu oil possesses significant antimicrobial qualities, as proven in antibacterial and antifungal tests.  It contains powerful bactericide and fungicide agents that defeat human and animal pathogens.  Tamanu can be applied directly to skin, undiluted. There are no reports of adverse effects from topical application. Tamanu oil has also compared favorably against antibiotics in alleviating these maladies: